...What does the future look like, or feel like, from the perspective of a yak in the coal mining district of Khovd? A Mongolian root extracted, illegally traded and sold internationally as a pharmaceutical product? Or the toolkit of an urban shaman, securing economic fortune for professional women in Ulaanbaatar?

Five Heads (Tavan Tolgoi) brings together the work of five anthropologists and five artists/collectives researching and responding to the dramatic rise and fall of Mongolia’s mineral economy. Drawing from ongoing fieldwork in Mongolia, the artists in this exhibition conceptualise crisis as a space for the emergence of new possibilities.

"...In 1964, at a time when Mongolia was suspended in the social and economic stasis of Soviet rule, Canadian media theorist Marshall McLuhan seized upon Ezra Pound’s definition of the artist as “the antennae of the race,” claiming “the power of the arts to anticipate future social and technological developments by a generation and more.” Indeed, art has taken on antenna-like properties in the context of Mongolia, where the need to rapidly re-think the impacts of mineral extraction and economic chaos is pressing and real, and where a resurgence in shamanic practices—often explained by shamans themselves through a language of code and telecommunications—can itself be thought of as a kind of radar or antennae capable of reaching through time, assuring future fortune in the face of agsan (the invisible and chaotic forces of transition).

Nested within what might be described as an “aesthetics of estrangement” (Castaing-Taylor) or a process of “optimal distortion” (Neilson & Pedersen) are proposals for alternative maps and re-surfaced trajectories that shatter a teleological timeline of progress, staking territory instead for speculative thought and practical forms of human-nonhuman reciprocity. As global cores and peripheries exchange places and rehearse histories of empire formation, Five Heads explores geo-ontological emergence, (post)capitalist futures, and alternative strategies for creative survival in the present. [...]" 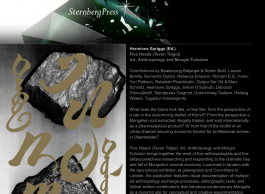 Five Heads is part of the European Research Council-funded project Emerging Subjects of The New Economy, led by Dr. Rebecca Empson in the Department of Anthropology, University College London, ERC-2013-CoG, 615785