"Spring 2012 by an isolated hot spring in the Colorado Desert, two old men re-erect hand painted signs that were taken down the previous night. The signs read:“NUDITY PROBABLE AHEAD”.

Five wooden lecterns hold transcripts documenting an argument that occurred here between residents of Slab City, an off-the-grid community in Imperial County California. It is a social situation wrung from the single wet spot in a very dry place. Curses feedback through an underwater sound-scape, long straws suck liquid, gargle collects in a communal spittoon. The pool is remakes itself as a centralised cauldron of bodily fluids that assemble over time. 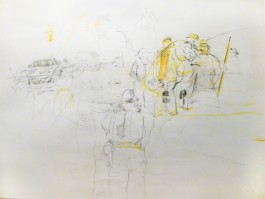