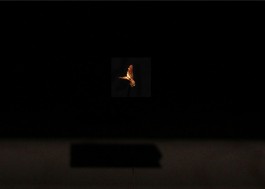 A Fly Caught in the Eye of an Artist Filming an Insect Trap'. Gold, Icelandic midge, 2013

A small midge flew into Curtis' eye whilst we were shooting the last scene of "The Thing Is All Around Itself", putting an end to our filming process. We decided to honour the fly's interruption and self-sacrifice by encasing it in gold, using an electron microscopy specimen preparation technique called gold sputtering. This was a technique we had observed whilst we were resident artists at the Entomology Department of the Swedish Museum of Natural History. Gold sputtering involves coating organic specimens in a thin layer of gold prior to the high resolution imaging of SEM, after which the material specimens are usually discarded. The bodies are discarded because the image data they produce is considered more valuable to science. Instead of completing this process, we removed and preserved our fly at the gold-sputter stage.

With thanks to Steve Barlow and the San Diego State University EM Facility.